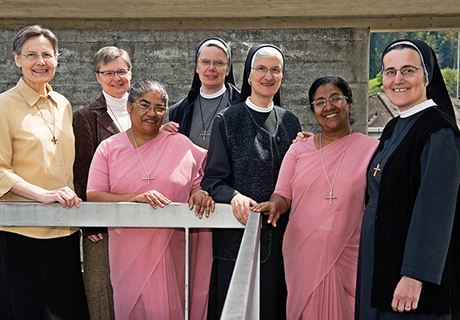 The General Chapter is our hightest legislative authority. Its membership is made up of the following:

The General Chapter elects the General Leadership. It discusses current questions of the community and gives directional input for the future.

The general superior and her councilors form the general leadership. This group makes sure that the charism remains alive. It promotes, shapes and preserves unity in diversity and makes diversity in unity possible. It implements the goals of our community and the decisions of the General Chapter. It accompanies the individual provinces and vicariates in their actual situations. It carries out the General Visitation in the provinces and vicariates.

Special emphasis is given to hospitality and a lived internationality. It is a place of encounter. Sisters from provinces and vicariates all over the world, who come for visits or on vacation, experience the generalate community as their home.

THE GENERAL LEADERSHIP MAKES SURE THAT THE CHARISM REMAINS ALIVE.